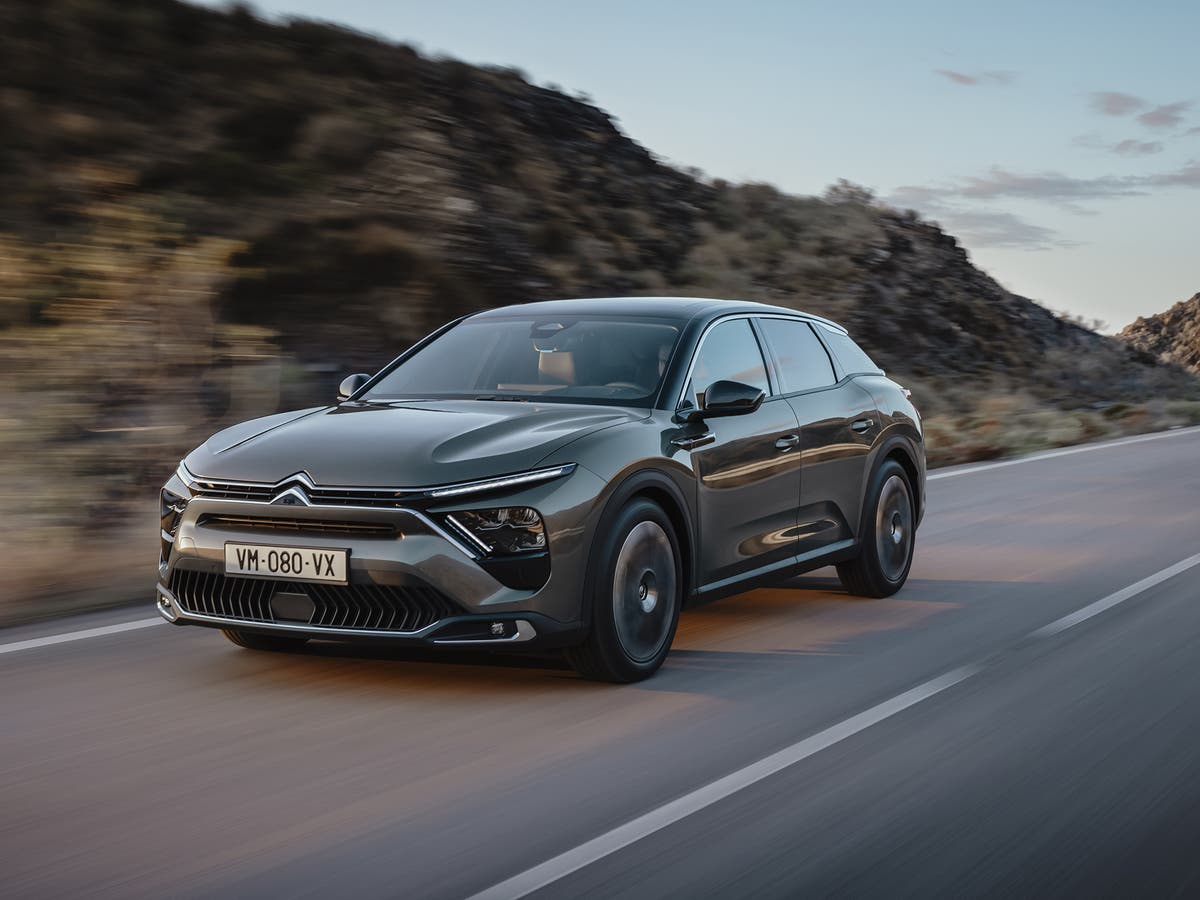 Jhe Citroën C5 X is kind of an intriguing car, as the big Citroëns tend to be. It’s pretty hard to know what to do with it when you first lay eyes on it. For Citroënists it has some stylistic nods to past glories, but in contemporary terms it looks a lot like an upscaled C4, if you’re familiar with that one, with its high waistline and sloping roof, but the C5 X is rather longer and actually has a noticeably large overhanging boot at the rear. It is, just as Citroën had planned, a combination of an executive sedan, an SUV, an SUV-coupé crossover and a station wagon.

There’s a bit of everything, and it all comes together pretty well. It’s meant to be a ‘celebration’ of the glorious CX, XM and C6, for example (but not the classic DS, which, presumably, is what their new DS branding is). Like the best of the great Citroëns, it has road presence and a kind of attractive posture. It’s sleekly aerodynamic, with a coefficient of drag of 0.29, and the SUV-like height gives you a nice commanding view of the world. It’s not a Range Rover, so you don’t feel quite majestic up there, but it feels good all the same.

Despite the panoramic roof, there is also good headroom, and there are five separate seats as well as plenty of luggage space in the rear – an ideal chic taxi in fact (545 liters of space with rear seats in place, 1,640 liters with the seats down and with convenient floor rails to protect the carpeted boot).

It’s undoubtedly one of the nicest cars Citroën has knocked out in recent decades – less pastiche than the C6, and far more distinctive than the C5 Aircross (which continues to be a more conventional SUV). There are plenty of sinuous curves and stripes that extend into the hollowed-out flanks and clam-shaped hood. It looks like the designers spent a lot of time in the clay modeling studio (or the computer-aided equivalents). It is a very beautiful thing.

Although I didn’t know it was built in China and very much inspired by Chinese tastes – the Citroën brand is big there and growing – I could tell by its length and the way the design gives a Aft class rental space for driver-trained occupants. In China, driving cars is not what people aspire to; being in the back with space to look out and expand on the world and with a good view of the road ahead is the goal of business and political leaders. The C5 X is made for them, and in its own way symbolizes the eastward shift in the balance of automotive power in the world (trade wars and real wars permitting).

So it’s big, okay, big enough to hold a washing machine in the back; but is it as “serene” as Citroën claims? What’s the point of a full-size Citroën car instead? Yes and no. It depends, more than usual, on the variant you choose. The entry-level model, for example, is pretty incredible value at £27,790, simply because it’s such a car for the money, even against competition as strong as the estate Skoda Superb or Volkswagen Arteon .

For this, however, you have to put up with the 1.2 l engine, perfectly designed to maximize consumption and performance (small displacement, but injected and turbocharged), but which must work hard enough to move forward, even with a gearbox. smooth eight-speed. The plug-in hybrid versions seem to ride better and are a good choice for people who can take advantage of the tax relief and do a lot of relatively short journeys – you get around 20 miles of range on electric alone. The pick of the bunch is the midsize 1.6 petrol-only versions, which make the most of the car’s potential for refined cruising. Needless to say these days, but still notable, there’s no diesel option, but also no all-electric version, which would be a serene machine indeed.

When it comes to travel, the C5 X in all trims has the usual driving aids, connectivity, soft but supportive seats, a large, attractive touchscreen and easily accessible main controls. The only drawbacks are a little too much road noise transmitted by the stylish 19-inch alloy wheels and the quality of the cabin materials, which are not particularly impressive even in the most expensive versions, going beyond of £40,000.

It’s not that they don’t look good, with their little Citroën chevron patterns, but they don’t measure up to some traditional competitors, such as the Skoda Superb, the Genesis G70 Shooting Brake or even the internal rival of the Stellantis group. Peugeot 5008 (not to mention the ever-present threat from premium brands). Some relatively modest upgrades could transform the model’s showroom appeal.

Of course, as well as being stylish, ‘different’ and comfortable, the big Citroëns have also historically suffered from heartbreaking depreciation – everyone’s almost new car of choice. Every time they launch a new full-size Citroën, the brand’s executives explain how it won’t drop like a stone on the second-hand market. Each time, it doesn’t quite work that way.

This time, we’re told, is really different, and they’ve produced independent CAP stats to prove that point. Maybe, and the current shortage of new cars due to the shortage of computer chips certainly helps, but maybe the real change is in the way we buy cars these days, via PCP, personal leasing and other plans, which blur and spread out depreciation costs, and make this traditional Citroën bugbear rather less relevant, or at least less visible. This time, the Citroën experience could really be different…