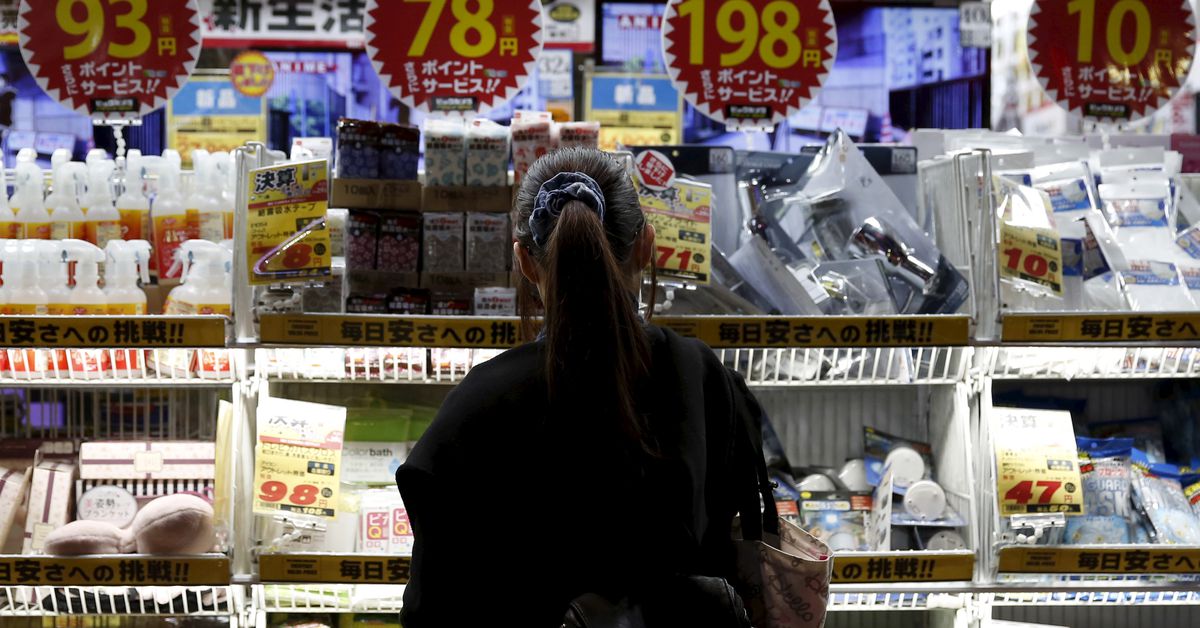 A woman looks at items outside an outlet store in a shopping district in Tokyo, Japan February 25, 2016. REUTERS/Yuya Shino/File Photo

They will include one-time cash payments of 50,000 yen per child for low-income families and increased subsidies for fuel wholesalers, according to a preliminary document seen by Reuters.

The ruling coalition, which faces upper house elections scheduled for July 10 as the economy weakens and voters struggle to cope with soaring energy costs, is also aiming to ensure a stable supply of oil and staple foods, according to the project.

The news of the supplementary budget – whose total value Keiichi Ishii, general secretary of the LDP’s small ally, the Komeito party, is estimated at 2.7 trillion yen ($21 billion) – was unexpected.

Some will be used for emergency measures and the rest will be set aside to offset the impact of soaring fuel and other commodity costs. More than 1 trillion yen will be allocated to maintain the current fuel subsidy program from June to September, according to the draft. Read more

The package is expected to be submitted to Parliament for approval in May. The current legislative session is due to end in June. Komeito’s Ishii said his party approved of the schedule.

Toru Suehiro, senior economist at Daiwa Securities, said the LDP was likely pressured by the Komeito to draw up a supplementary budget rather than draw funds from the country’s contingency reserve.

Suehiro said Thursday’s news also reflected a preference for using fiscal tools to ease the burden on households rather than adjusting monetary policy or intervening in the foreign exchange market to support a trading yen. almost 20 years against the dollar.

Covering the additional stimulus could involve additional bond issuance, further adding to the heaviest public debt burden in the industrial world, which is more than twice annual economic output.

Japan entered a long period of near-zero inflation in the early 1990s that determined how policymakers managed its economy for decades.

With the war in Ukraine and soaring fuel prices, inflationary pressures are mounting. While core CPI remained low at just 0.6% year-on-year in February, energy costs rose 20.5% in that month, while headline inflation hit 9.5% in March.

(This story corrects paragraph 3 to say payments per child, not households)