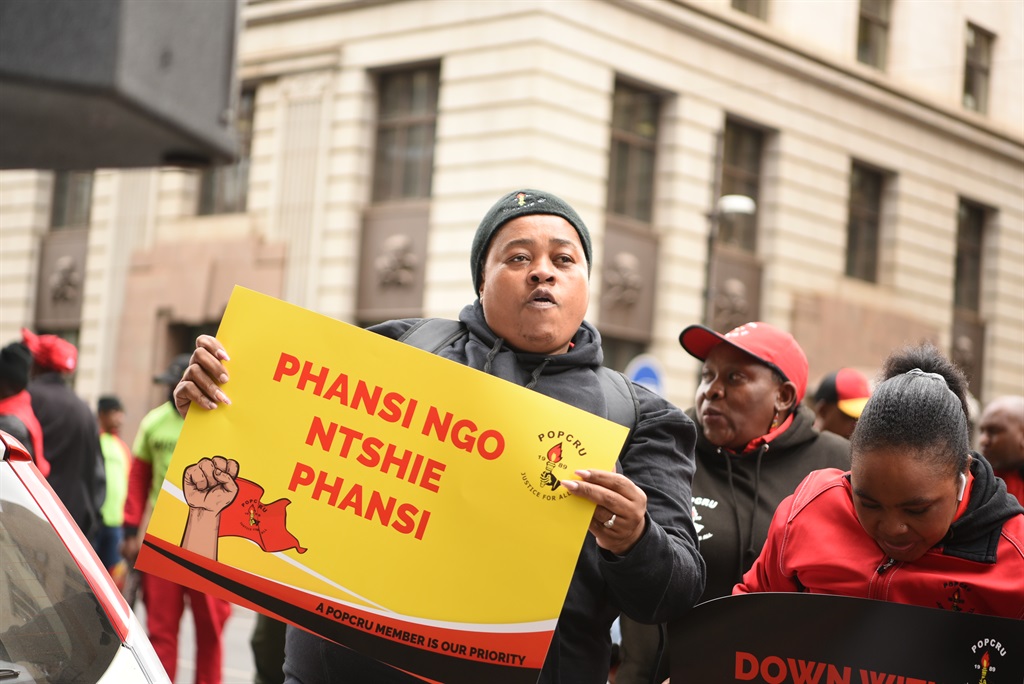 Members of Popcru protest outside police headquarters in Pretoria.

Police Minister Bheki Cele was greeted with boos and jeers by members of the Police and Prisons Civil Rights Union (Popcru) after receiving a brief of demands rejecting the increase proposal salary of 3%.

Around 1,000 Popcru members marched from Kgosi Mampuru prison to Union buildings in Tshwane on Tuesday to express their frustration.

After arriving at the Union Buildings, Popcru Chairman Zizamele Cebekhulu addressed the crowd and centered his speech on wage issues.

Cebekhulu said President Cyril Ramaphosa could never be proud of police, corrections or traffic officers who do not have a home of their own.

He said the officers had to fight crime, but lived in shacks.

He added that even the apartheid regime did not do this to the police.

Cebekhulu threatened to strike if their demands were not met – and said they would “invade” the national treasury. On Tuesday, members of Popcru demonstrate outside police headquarters in Pretoria.

“You cannot hide behind the Treasury…this Treasury, one day we will invade it.”

The memorandum to Ramaphosa focused on budget cuts within the criminal justice cluster.

“We are gathered here to express, on behalf of our members and the general population, our frustrations at the level to which the National Treasury has defied the objectives you have set for the fight against crime in our country,” reads the memorandum.

“Due to unilateral Treasury decisions, violent crime has massively reached high proportions, with our law enforcement officers having no power to suppress this phenomenon.” Popcru rejected the 3% pay rise and R1,000 bonus offer. The union was demanding payment for an agreement, which dated back to 2018.

Popcru called for the reversal of budget cuts, the implementation of a housing program and an increase in danger allowances.

The union, whose members are police officers, demanded an end to the rise in violent crime and the reinstatement of fired officers. Popcru members demonstrate outside the SAPS headquarters in Pretoria.

It also emerged that the union was calling for a change in the law, calling for the killing of police officers to be categorized as treason.

After reading the memorandum, Justice Minister Ronald Lamola said it would go through the bargaining council process.

This comment was met with anger by the members of Popcru, who started shouting and mocking Lamola.

After Lamola’s conclusion, Cele attempted to address the crowd and was met with, arguably, even more disdain.

Cele tried to explain that he would ensure that the memorandum was passed on to the people concerned to receive their attention.

But Cele was then taunted and booed.

“This budget will put money back in your pockets”