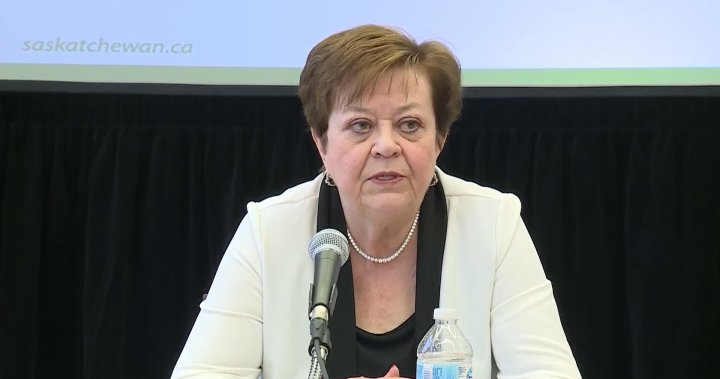 Donna Harpauer says Saskatchewan is on track to balance its budget by 2026-27.

Harpauer, the province’s finance minister, forecast a $463 million deficit for the coming year as she tabled a 2022-23 budget on Wednesday with record spending and revenue.

She said a growing economy and more jobs have improved Saskatchewan’s fiscal outlook, with the projected deficit now down $2.1 billion from last year’s budget.

“Our finances will steadily improve and we are on track to break even through careful expense management and prudent revenue forecasting,” Harpauer said.

Harpauer projects revenue of $17.2 billion in the next fiscal year, up from $2.7 billion in last year’s budget.

Harpauer said the increase in revenue is largely due to higher oil and potash price forecasts.

“While volatile global events have made commodity prices difficult to predict, as always, our revenue guidance is based on conservative oil price projections,” Harpauer said.

“It is too early to tell whether oil prices will remain high for an extended period and what impact this might have on revenues. We will continue to monitor the impact on income and affordability and respond as needed.

Opposition Leader Ryan Meili said there was nothing in the budget to help families cope with the high cost of living.

“The people of Saskatchewan needed a lifeline and instead, Saskatchewan. The party threw an anchor at them,” he said.

“This budget provides no relief, nothing at all, for the costs that keep families from making ends meet.”

“We would have liked to see additional cost relief measures introduced in the budget, such as keeping the small business tax rate at zero percent for the foreseeable future and freezing property tax mill rates for education,” said Brianna Solberg, Senior Policy Analyst at CFIB.

“These actions would go a long way to helping small businesses.”

“Saskatchewan’s budget calls for increased revenue, but the government plans to spend every penny and borrow another $463 million,” said Todd MacKay, Prairies director of the Canadian Taxpayers Federation.

“If a family hoarded their credit cards during tough times and then won the 50-50 draw at a Riders game, they wouldn’t be spending the windfall and would continue to borrow, but that’s exactly what the Saskatchewan government.

Harpauer, however, warned there was a risk to the economic growth she announced in the budget.

Geopolitical tensions between Russia and Ukraine could aggravate global supply swings and tensions with trading partners could pose a significant risk to the outlook, she added.

Total public debt is estimated at $30 billion, which Harpauer said represents an increase of $2.3 billion from last year’s budget.

She added that higher revenues reduce the need for operating debt by $450 million in 2021-22, bringing operating debt to less than $10 billion. This will carry over to the 2022-23 debt forecast, she added.

One area seeing more money is health care, where Harpauer said a record $6.8 billion would be spent.

“This includes increases to hire and retain doctors, hire and train more nurses, and hire more paramedics to provide the best possible health care services to the people of Saskatchewan,” she said.

The province is allocating an additional $21.6 million to reduce surgery wait times and fund thousands more surgeries this year.

This is part of a three-year plan, previously announced by the province, to address the backlog of approximately 30,000 surgeries caused by the COVID-19 pandemic.

Meili said there are huge gaps in the province’s health care system and the budget does nothing to fill the gaps.

“Instead, we see a recycled ad about surgeries that won’t go anywhere near what we need to deal with the huge backlog.”

Harpauer said Saskatchewan’s 27 school divisions will receive $1.99 billion in operational funding for the 2022 school year, up $24.9 million from the current school year.

It is also allocating $7 million to create a new fund allowing school divisions to hire up to 200 additional full-time teaching assistants.

Meili said the government suffers from “economic illiteracy” when it comes to education funding.

“This budget will force school divisions to make cuts to programs at a time when kids need more help,” he said.

“If children don’t learn today, we won’t be able to grow tomorrow.”

The head of the Saskatchewan Teachers’ Federation said the budget cuts operating expenses by more than 3% and could impact programs and services in schools.

“The size and complexity of classrooms are growing and becoming more urgent every year. These challenges are symptoms of a chronically underfunded education system,” said Patrick Maze.

“Teachers and school staff have shown incredible creativity and resilience in trying to meet growing needs without the proper tools, but there’s not much they can do. Student needs are not being met.

The film and television industry is getting a fiscal boost.

The province said it will invest an additional $8 million in Creative Saskatchewan, bringing total funding to $10 million for the grant program.

Saskatchewan. the government is providing $10 million for a film and television production subsidy in the 2022 budget

Harpauer estimated this would generate a $50 million increase in production.

“Including a significant increase in spending in the hospitality industry, which has been hit hard by the pandemic,” she said.

“We’re going to see a lively soundstage in Regina.”

It will be more expensive to attend sporting events, movies and concerts later in the year.

Harpauer said the provincial sales tax (PST) is expanded to match the federal GST base for admissions and entertainment events.

It will apply, in part, to sporting events, concerts, museums, fairs, movies, gym memberships and golf green fees. It comes into effect on October 1.

Roughrider games, concerts, games, gyms to get more expensive with Sask. the government does not add sales tax

Harpauer expects it to add $10.5 million in revenue this year and $21 million annually in subsequent years.

Smokers will have to pay more for cigarettes from Thursday.

Tobacco taxes increase by 2 cents per cigarette and 8 cents per gram at midnight on March 23. The province is also increasing the tax on non-burning products by 1.3 cents a stick.

The increase is expected to generate revenues of $12.1 million.

Harpauer is also adjusting the mill rate for the school portion of property taxes and narrowing the gap between the highest and lowest mill rates to improve overall fairness.

She said a slight increase in rates per mile, along with planned base growth, should add $20 million in revenue in 2022-23.

Stock traders brace for a chaotic reopening of the Russian market