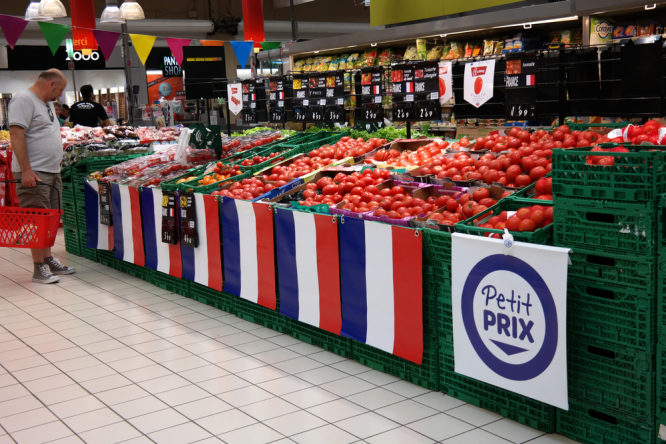 Since the beginning of the year, inexpensive private label supermarket products have been gaining popularity in France, while organic and national brand products are less present in consumers’ baskets.

Sales of products with a brand name, for example Lindt or Danone, fell 0.5% in the first quarter of the year, according to figures from data firm NielsenIQ, an expert in retail and business intelligence. consumers.

At the same time, sales of inexpensive own-brand products increased by 0.1%.

And within the category of own-brand products, sales of the least expensive brands increased by 11%.

A word that we will hear a lot in the coming weeks following inflation: “trading down” or downscaling (of consumer demand). Can already be seen…
Going through @NielsenIQFrance pic.twitter.com/KQR1GCELgc

Philippe Goetzmann, a retail expert, told BFMTV it is linked to inflation, which is expected to reach around 5% on supermarket produce this summer.

“When there is a crisis and it leads to high inflation, consumers change the way they buy,” he said.

Inflation rates have risen across Europe partly due to Russia’s invasion of Ukraine, as well as global supply chain issues related to the Covid pandemic.

Mr Goetzmann said that over the past 10 years, household food budgets have been stable, while shops have been competing for lower prices and there has generally been deflation. This has allowed people to invest more in premium products.

“Today the opposite is true,” he said.

Read more: The rise in the inflation rate triggers a new rise in the minimum wage in France

A February study by the E.Leclerc Observatory shows that 94% of French people buy own-brand supermarket products, and that a third buy them every time they go shopping.

Consumer expert Pascale Hébel said the popularity of cheaper, own-brand products will continue for some time.

“The increase in pasta consumption observed after the 2007-2008 crisis lasted until 2016. You don’t change your diet overnight,” she said.

She added that she thinks that in the long run, consumers will think more about the “type of product” they buy than the brand.

Read more: The price of toilet paper will rise sharply, according to the boss of E. Leclerc

Read more: The price of eggs up sharply in France following the avian flu epidemic

The head of leading French organic supermarket chain Biocoop said 2021 was the “first time Biocoop has seen a drop in revenue”.

Sylvain Ferry said the company had a turnover of 1.6 billion euros last year, 1% less than in 2020.

Despite the slight decline, the company opened 81 new stores.

Otherwise, the Covid pandemic has caused more people to favor local products, to the detriment of organic products which are not necessarily produced locally.

He also said they would slow the pace of new store openings, with around 50 new ones expected in 2022, from an average of 70 in previous years.

“We will also be streamlining the range of products we stock,” he said.

Rush for oil and flour stocks in France: sales up 55% compared to 2021