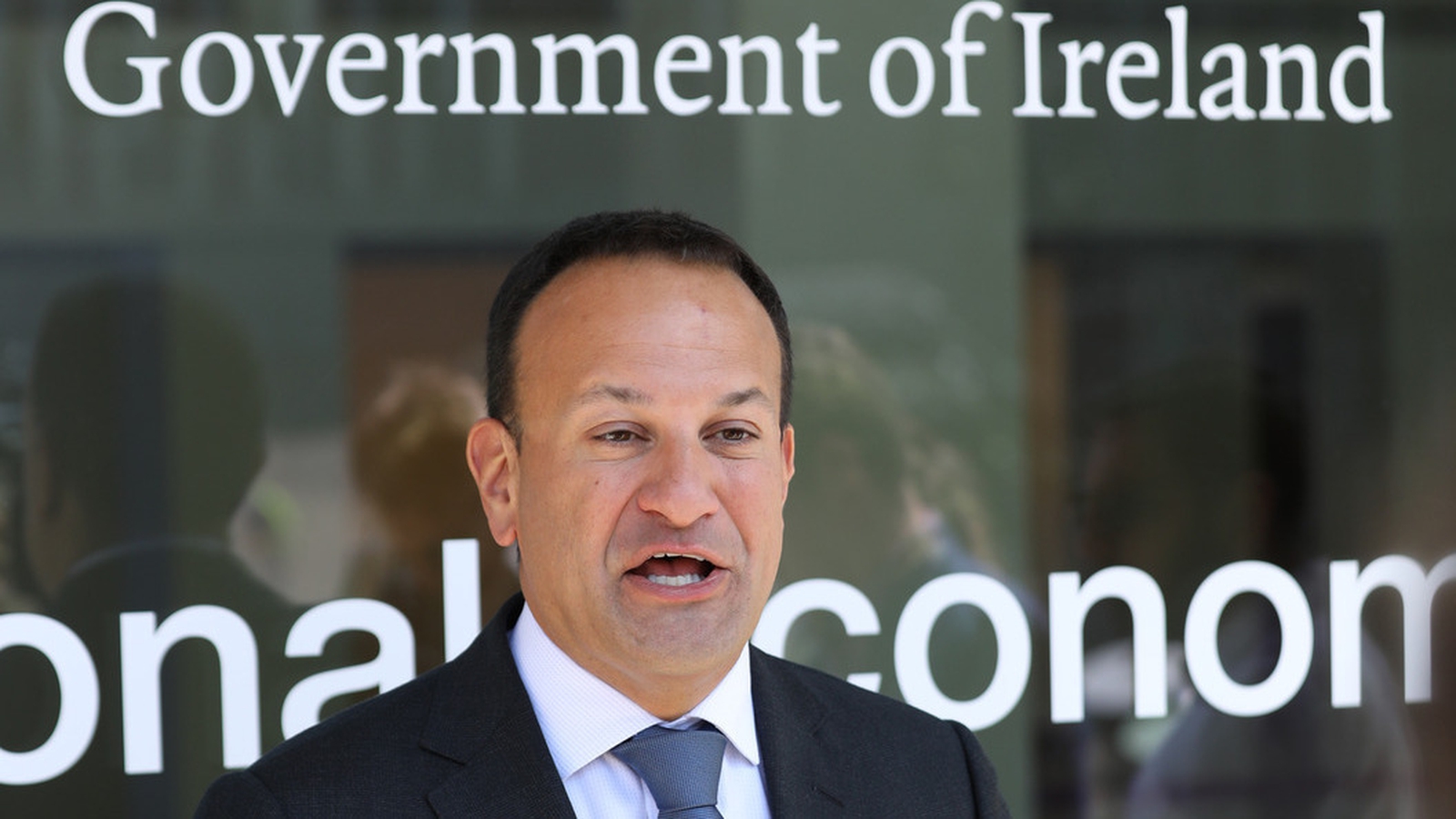 Tánaiste Leo Varadkar said there was a need to include a substantial social protection package in the October budget, along with greater childcare support and a lower tax burden for middle-income people .

The Fine Gael leader was speaking at the National Economic Dialogue in Dublin, where interest groups from across society met to discuss the budget.

Taoiseach Micheál Martin earlier told delegates that as it prepares for the budget in October, the government will maintain a calibrated and targeted response to inflation.

He said that while the government will continue to help, it cannot ease the full burden of inflation.

This afternoon, Mr Varadkar agreed with the Taoiseach’s comments that continuing inflation is not working, warning that he does not believe the current spike in inflation is temporary and can last for years.

He said it is widely accepted that “the 2023 budget must focus on the cost of living crisis”.

Mr. Varadkar said that as part of an anti-inflation strategy, the government can reduce the income tax burden on middle-income workers and families by indexing tax credits and brackets.

He also advocated for increased childcare subsidies, to reduce costs for parents, saying “investing in childcare makes sense now and in the long term”.

He said all three parties in government were determined to get things done on the cost of childcare and Children’s Minister Roderic O’Gorman was working out options.

He said they needed to look at what to do, how much it would cost and how quickly it could be done.

He said the 2023 budget will “of course” include a substantial pension and social benefits package, greater than announced in last year’s budget, but the extent has yet to be determined.

Today’s event brought together trade unions, business groups and research institutes, as well as representatives from the community, voluntary and environmental sectors.

Upon his arrival, reporters asked the Taoiseach if there would be an emergency budget or other interventions before October.

He said the government cannot chase inflation and does not want to repeat the mistakes of the 1970s.

“We want to do this in a detailed and evidence-based way, doing important work and looking at how we are reducing costs and the next budget will be a cost of living budget,” Mr Martin said.

“What we do has to be comprehensive and sustainable over a longer period of time than just going from month to month.”

The meeting was not intended to produce specific budget proposals or recommendations, but to assist participants in preparing their own pre-budget submissions.

The overarching theme for this year’s dialogue was “Building Economic Resilience to Face International Challenges”, with a variety of topics discussed including climate policy, housing, agribusiness challenges and changing market conditions. work.

Unions have focused on how the government plans to deal with cost of living pressures after public sector pay talks last week failed to reach an agreement.

“The Irish Trades Union Congress will want to hear from the government what action it intends to take immediately to protect the incomes of low and middle income workers who are seeing the value of their wages eroding each week given the current inflation .crisis,” said ICTU General Secretary Patricia King.

Journalists have asked Public Expenditure and Reform Minister Michael McGrath if the government will increase the offer he made to unions at talks last week.

“Hopefully we can resume talks, I think it’s in everyone’s interest that we have a collective bargaining agreement,” Mr McGrath said.

“It helps ensure industrial peace and also gives us certainty over a very broad area of ​​spending.

“I think the offer that was made by the government was a good offer, it went a long way towards matching the level of inflation projected, but we have to make sure that any deal is affordable and sustainable.

“I hope we can resume talks and that the government’s door is very open, but there has to be a realistic basis to reach an agreement.” 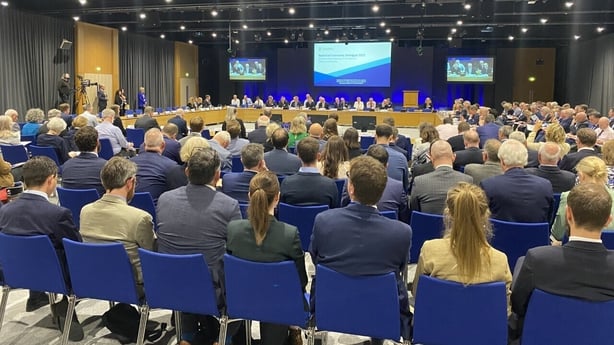 Social Justice Ireland highlighted cost of living pressures during today’s dialogue and urged the government to protect low-income households in the budget.

“Uncertainty once again dominates Ireland’s social and economic outlook and sets the context for the 2023 budget, but this should not be used as an excuse to, yet again, leave Ireland’s poorest behind” , said SJI CEO Dr. Seán Healy. The Environmental Pillar, a coalition of environmental groups, said at today’s meeting that there has never been a more pressing time to address the twin crises of climate and biodiversity, as the cost of daily living is increasing more and more every day.

“We live in a time of parallel crises, but one should never be dealt with at the expense of the other,” said Oisín Coghlan, director of Friends of the Earth Ireland.

Meanwhile, director of lobbying and influencing at Ibec Fergal O’Brien said employers should not be subject to additional costs for doing business.

Speaking on RTÉ’s Morning Ireland programme, he said the focus should be on sustaining long-term growth.

“We must not add excessive costs to employers in terms of the costs of doing business, in terms of labor costs.

“We must continue to focus on the money that we can continue to spend, because remember that public finances are quite strong, but on measures that will support competitiveness, productivity, innovation, skills and physical infrastructure across the economy. The things that will support long-term growth,” he added.

Mr O’Brien said it is essential to ‘find the right balance’ when it comes to supporting people who are ‘experiencing a decline in their standard of living’.

Context of breakdown of wage negotiations

Today’s dialogue also took place against the backdrop of a breakdown in wage negotiations between public sector unions and the government just before the weekend.

The ICTU said the government had offered a pay rise of 2.5% this year and another 2.5% next year, but said the proposal fell well short of inflation.

This morning ICTU President Kevin Callinan said the unions had made it clear they were in talks with the government on ‘negotiable’ wages and that was what they hoped for.

He said the “difficulty arose” when officials from the Workplace Relations Commission who were facilitating the talks were told by government officials “that they were not ready to change their position”.

Also speaking on Morning Ireland, he said there was a gap between the two sides and no further progress was possible at this stage.

He said the WRC must indicate that it believes progress is possible and that there must be movement from the government side.

“Inflation is really the enemy of workers. Workers are not the cause of inflation, they are its victims,” ​​he said.

He explained that in the public sector there is a two year agreement for 2021 and this year and the unions have asked for a revision of the agreement because the salary conditions were negotiated at the height of the Covid, where public finances were in a very different situation. to where they are now.

He said the annualized inflation rate then was 2.4%, but this year it looks like it will be around 7%.

“The proposal that we received from the government side, I don’t think is useful in circumstances where there is a possibility that the talks will resume, that we will enter into the negotiation of the agreement on the air, but we have clearly indicated that we were ready to adapt our position, but it takes two to tango.